The VRP is committed to raising awareness about subjects related to reducing serious violence in Merseyside. Their campaigns are a regular feature to their work and they are produced with the ambition to provide the best life chances for all, believing everyone has the right to be free from violence.

Campaigns are designed to get to the very heart of the matter, to be authentic and real. Merseyside’s VRP will make every effort to communicate with everyone, young and old. We will use what it takes to communicate. We might opt for traditional methods collaborating with local media, or old-school billboards, the back of buses, or talk to passengers travelling across the county on Mersey Travel. We’ll work online in digital with our own social media platforms, (we may even use TikTok one day), or we might head into film, animation or Insta stories. And we’ll always be working hand-in-hand with our friends and stakeholders as we try together to make Merseyside a safer and healthier place to live for everyone. 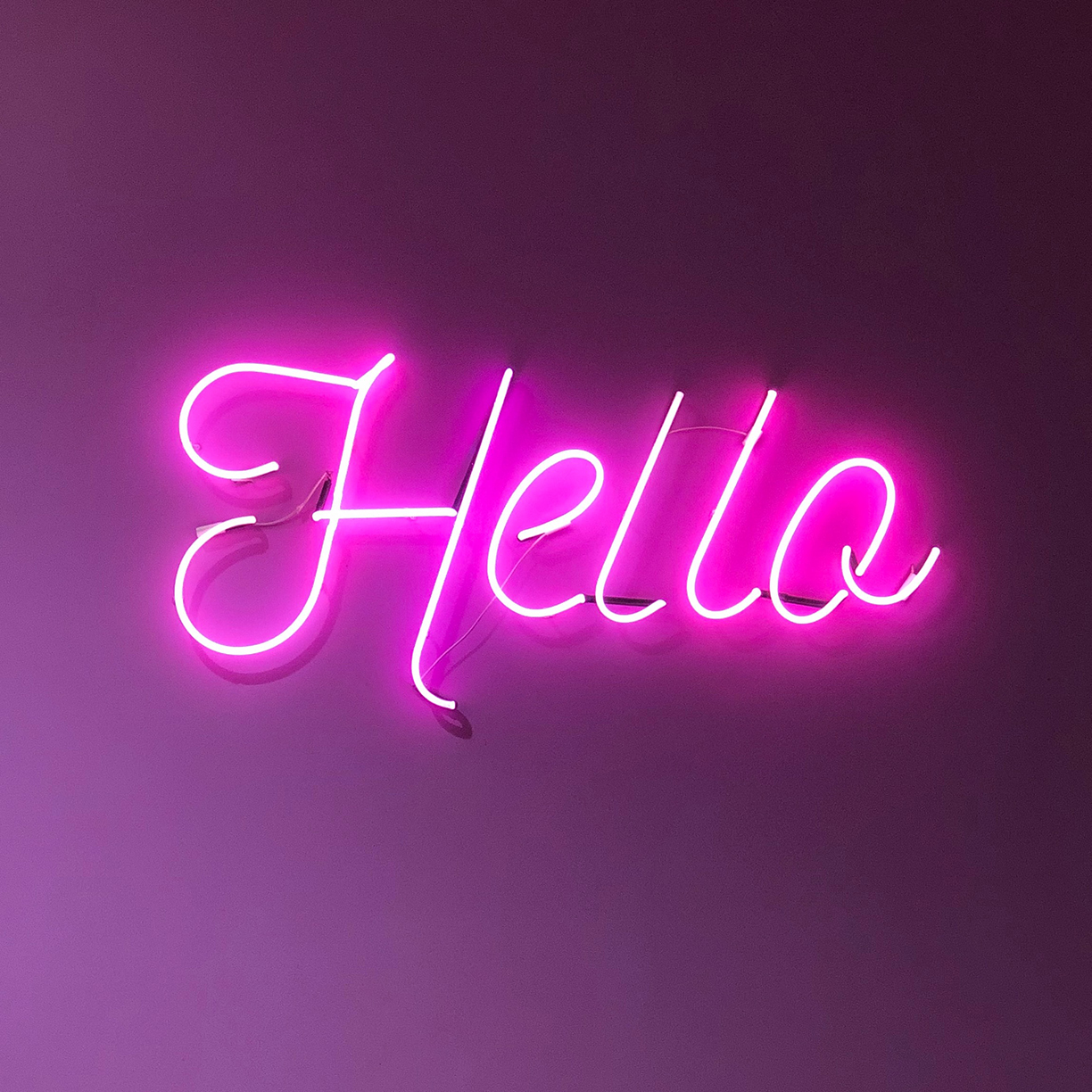 The VRP’s launch campaign is called ‘Eyes Open’ and went live on 23 March.

This campaign asks the public to keep their ‘EYES OPEN’ to the signs of drug gangs grooming our county’s kids, and if they see, hear or suspect anything to report it anonymously to Crimestoppers.

After London, Merseyside’s drug gangs are the second biggest abusers of kids. Merseyside’s VRP, supported by numerous organisations such as Merseyside Police, local authorities, Youth Offending Service and schools, felt compelled to do something to let people know and ask for help.

The ‘EYES OPEN’ campaign has been driven by the rising numbers of kids, from all sorts of backgrounds, being abused by local drug gangs in an attempt to hide criminal activity. They choose kids because they are easy to manipulate and exploit and they are less likely to be stopped by the police saving drug gang members from being caught and reducing the risk of conviction. 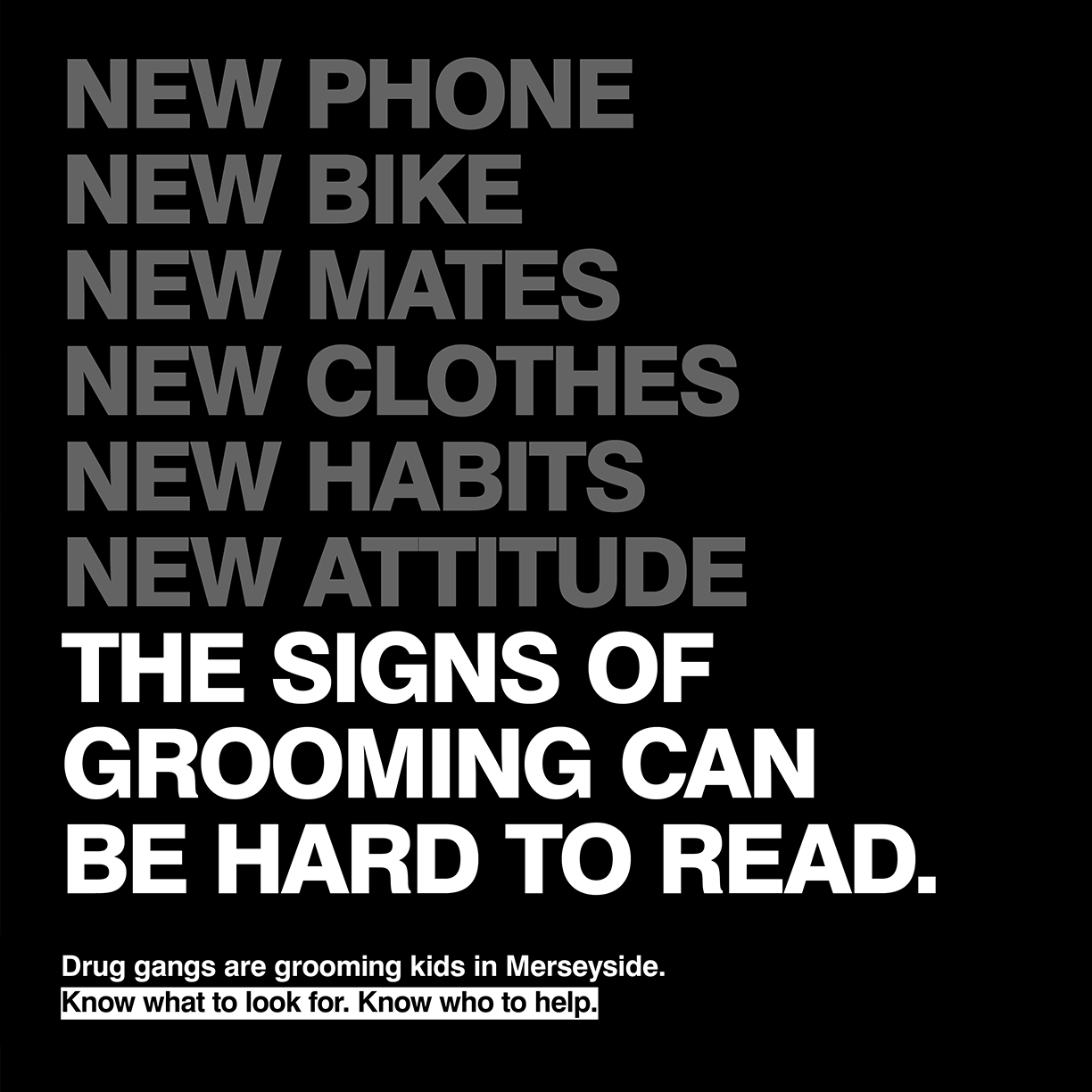 Posters and billboards will go up around Merseyside saying: “Know what to look for. Know who to help,” which will explain the signs of grooming that people need to look for and the real experiences from a kids’ point of view.

Superintendent Mark Wiggins, who heads up Merseyside’s Violence Reduction Partnership, which has produced this campaign said:

“It’s time we saw drug gangs for the abusers they are. Drug gangs are grooming kids in Merseyside every day. Grown men, and sometimes women, are grooming vulnerable kids who come from all sorts of backgrounds. They are coercing them to sell drugs, to be on the end of a phone line 24 hours a day to deliver drug orders, to store firearms and weapons, and to invade vulnerable people’s homes often hundreds of miles away from their homes to help the gangs make money.

“Merseyside’s Violence Reduction Partnership, in conjunction with a number of key partners such as Merseyside Police, local authorities and schools, are asking everyone, whether a parent or not, to step up and know what the signs of grooming are. The ‘EYES OPEN’ campaign lists the signs of grooming so everyone can start to look out for the abuse and report it anonymously to Crimestoppers. We have also produced a booklet for schools to help kids understand what to look for. This depraved criminal behaviour has to stop.” 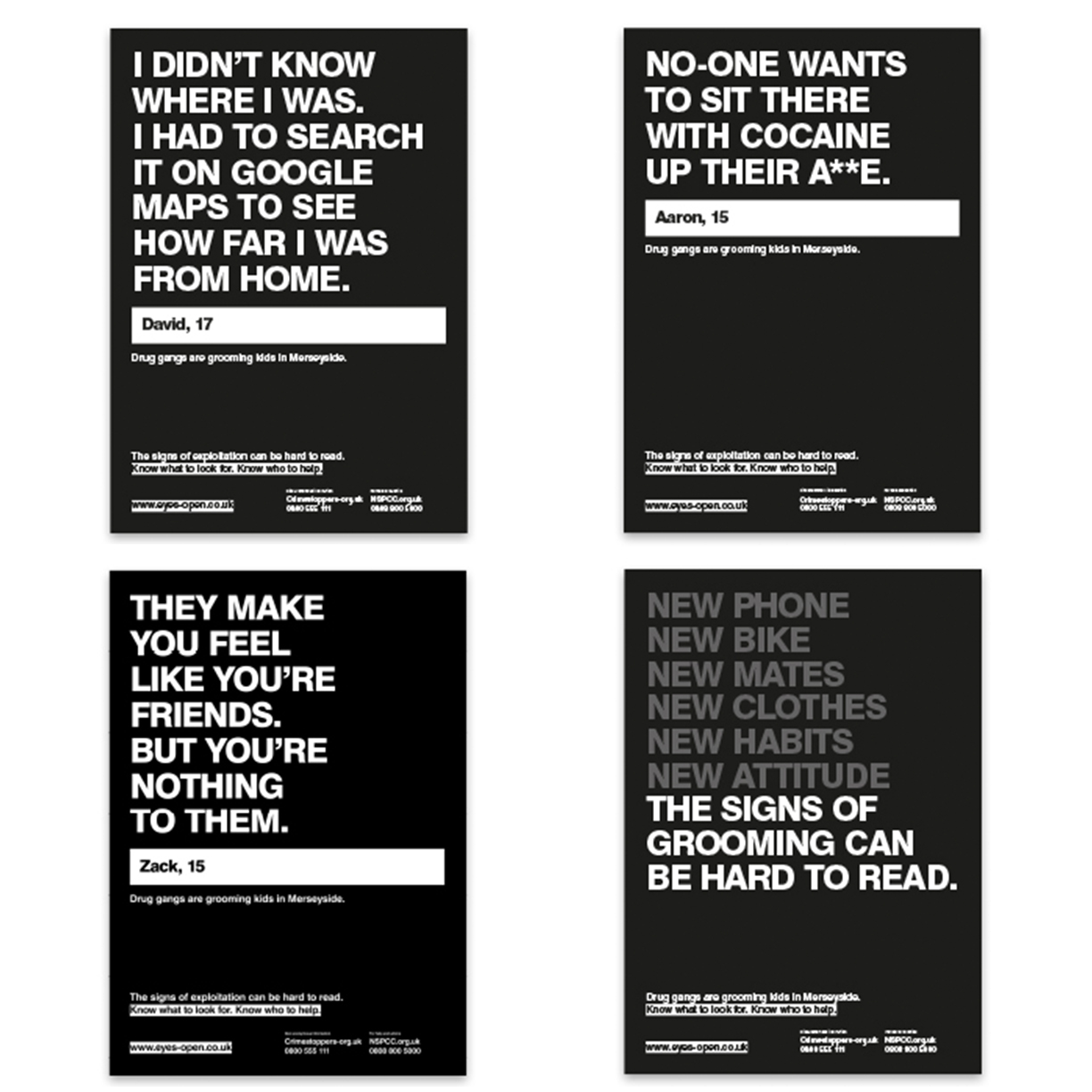 Merseyside’s Police Commissioner Jane Kennedy said, “I welcome this hard-hitting campaign – the first by Merseyside’s Violence Reduction Partnership - because it is designed to increase awareness of the criminal abuse of our children. Very often we do not notice or recognise the warning signs when a young person is being groomed for exploitation and even when we are worried we don’t know what to do.  We need the public’s help if we are to prevent young people falling prey to the criminal gangs and I hope this campaign will enlighten and educate us all.” 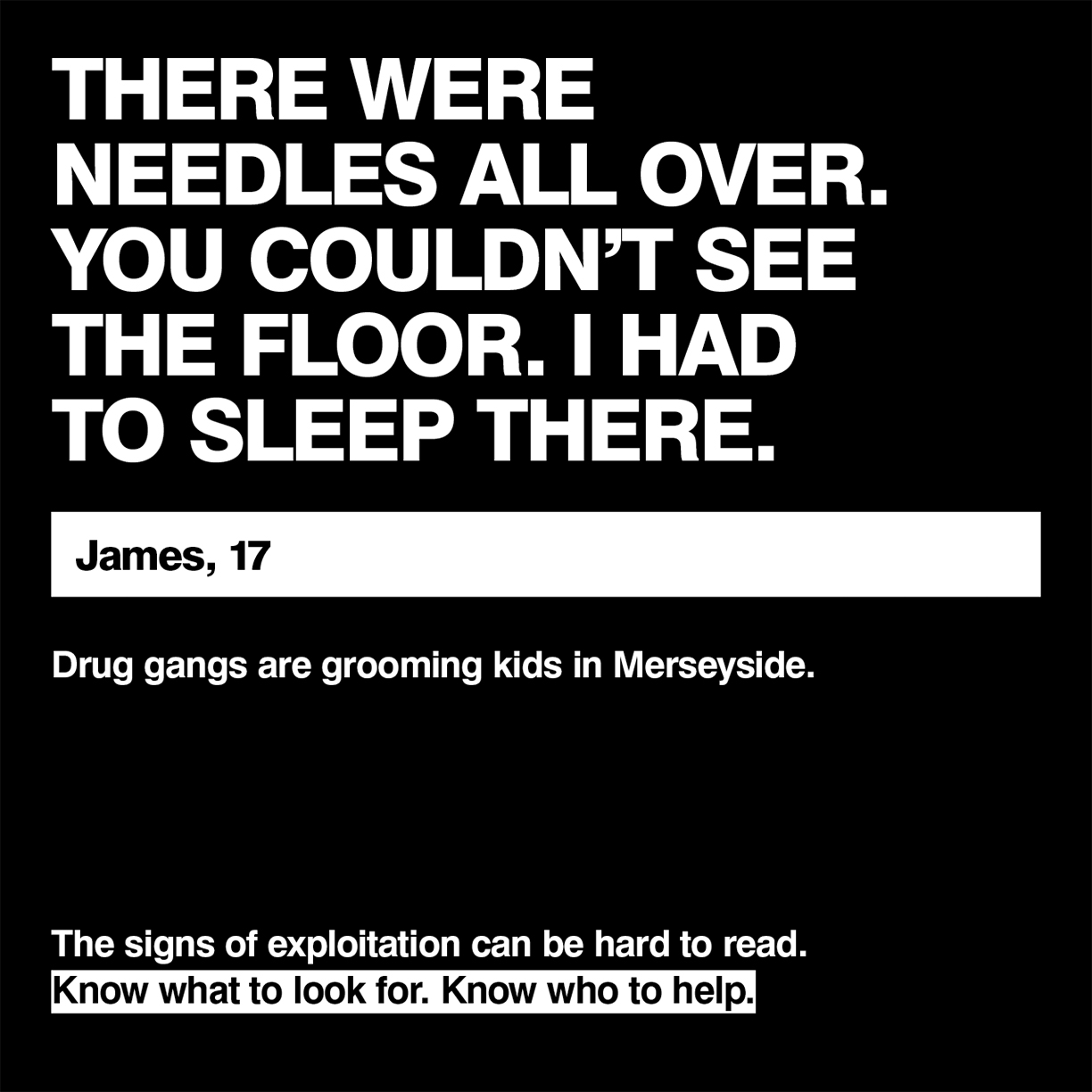 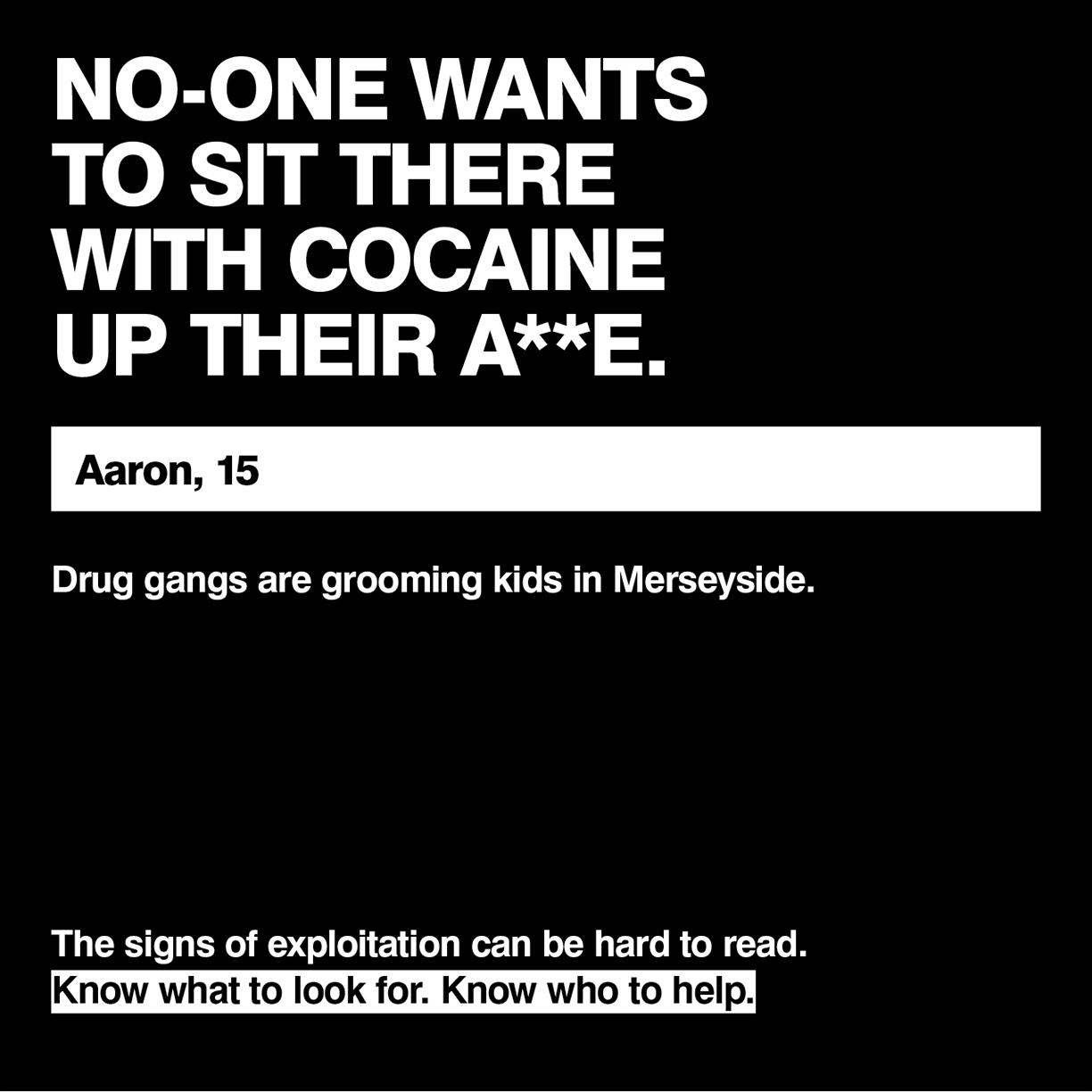