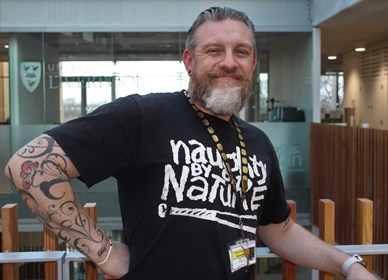 He used to mix cocktails at some of Manchester and Liverpool’s most prestigious bars.

But now the once bartender Andrew Miles, (who prefers to be known as Miles) is shaking up the fate of injured children and stirring them up to lives free from violence.

The 46-year-old is one of Merseyside’s first Youth Violence Reduction Navigators – which means he will be on the ground, embedded into A&E teams in all three major hospitals in Merseyside. He will intervene in the often-troubled lives of seriously injured children as a result of violence within the community.

Funded by the Merseyside Violence Reduction Partnership (MVRP) and delivered by Merseyside Youth Association (MYA), the Navigators programme works to support young people aged between 10-25, who present at A&E departments having been either victim or perpetrator of violence.

“The idea of the programme is to get medics at Liverpool Royal, Aintree and Alder Hey Children’s Hospital to contact the Navigators immediately after treatment” said Detective Superintendent Siobhan Gainer, Head of the MVRP, “this allows us to get to know that young person at their lowest ebb, signpost them to services that can offer confidence-building activities that build-up resilience and combat fear. It may also give us access to the perpetrator, not necessarily to bring them to book but to make them aware of what they have done and move them away from toxic environments. It is the early intervention that is so important about Navigators.”

The programme is also delivered in Greater Manchester, West Midlands and Greater London areas by various agencies with great success. Having the Navigator programme in Merseyside is much needed and has been well received by hospital staff so far.

“We have got to every Emergency Department team meeting we can, and at different shift times” said Miles, “and the staff are really beginning to get to know us now, which is great’’

It may seem a long way from his days as cocktail bar manager, but Miles says that working with troubled young people is truly a passion, which is why the single parent father retrained aged 32 and gained his degree in Youth & Community from Manchester Metropolitan University back in 2015. Miles has been supporting young people in Special Education Need units throughout Greater Manchester and Merseyside up until joining the Navigator Programme at the beginning of the year.