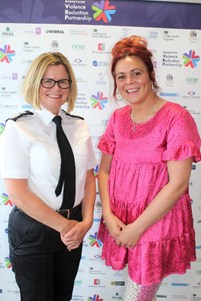 England’s police lead for violence against women and girls DCC Maggie Blyth heard a spirited monologue from a Liverpool actor.

Local thespian Louise Garcia performed the essence of a play that has been touring schools, colleges and other educational settings to teach boys that derisive names, obscene texts, and inappropriate touching is wrong.

And following the matchless performance of her powerful monologue – staged at a meeting with the Merseyside Violence Reduction Partnership (MVRP) - the senior officer’s immediate critical acclaim was: “I have seen drama used a lot during my career – but this is the most fantastic way of getting across the point.”

Brand new research by the MVRP has shown that over half of the young people in our region are frightened of sexual violence. Head of the MVRP Detective Superintendent Siobhan Gainer believes the way we change these behaviours is through education, understanding and empathy.

She said: “To some, name calling may seem like banter and certainly not the first step on the road to causing harm, upset and leading to more serious crimes. But in some cases that’s exactly what happens. A fundamental disrespect for women and girls is behind so many of the violent crimes that happen in our homes and on our streets. Nobody is born with prejudicial and hateful ideas, they can be picked-up from the environment people live in, and that is why it important to intervene, early.”

An actor with Afta Thought, which uses drama to help people deal with the problems in their lives, Louise has been portraying Chrissie, a teenager who is labelled, judged and sometimes despised simply because of the way she looks and sounds. Her monologue is insightful and unapologetic (Afta Thought consult with young people before developing their scripts) and leaves her tormentors with this thought: “I’m not the one who needs to change, I’m not doing nothing wrong, THEY are.”

Best known for the play “Broken Biscuits”, Louise’s rendition has been so realistic, that some of the students have not even realised she is an actor! “The role has been challenging for the young people because it is a challenging topic. The initial response has been disbelief, anger and sadness but those who have seen it have promised to call out inappropriate behaviour” revealed Jackie Jones, Training Specialist from Afta Thought.

Nationally and locally, the worrying subject of violence against women and girls has prompted much attention, with The Mayor of Liverpool Joanne Anderson and Merseyside Police and Crime Commissioner Emily Spurrell making strong commitments to combatting it.

For Det Supt Gainer, education must be the cornerstone of that initiative, to ensure VAWG is solved now  - and for generations to come. “Our region has some superb initiatives such as Safer Streets but as a society what we are looking for is an entire cultural shift. I liked the way Afta Thought brought out the need for empathy. Boys and men need to consider how what seems to them to be an innocuous comment can make another person feel vulnerable and unsafe. If they believe it is acceptable, then the damage is done and is sure to escalate. I am encouraged that their and our work is inspiring a new sense of respect. If women and girls are humanised, then the violence will reduce” she concluded.

Merseyside’s Police Commissioner Emily Spurrell said: “Sexual violence doesn’t exist in a vacuum. It’s rooted in a society where misogynistic and patriarchal attitudes are allowed to fester and go unchallenged.

“Until we address these daily occurrences of harassment and abuse, nothing will change in the fight against Violence Against Women and Girls.

“That’s why I’m lobbying nationally for misogyny to be made a hate crime. Supported by the MVRP, we’re also delivering training in schools across Liverpool through our Safer Streets campaign to educate young people about healthy relationships and appropriate language. By intervening early, we can change attitudes and prevent these unwanted behaviours developing into more serious behaviour.”