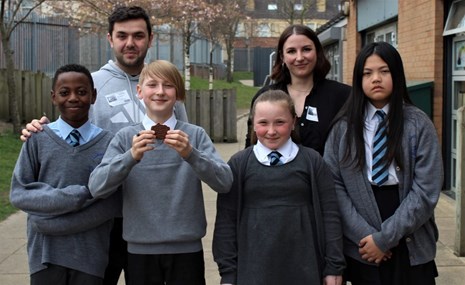 Primary school pupils across Merseyside know what is meant by consent after a new educational resource has put inappropriate images sent via cell phone into the spotlight.

As part of the Liverpool Safer Streets scheme, 10 and 11-year-olds took part in scripted and improvised scenes around what is appropriate to post on social media or share with friends.

And whilst most online abuse programmes are usually aimed at teenagers, Detective Superintendent Siobhan Gainer, Head of The Merseyside Violence Reduction Partnership, said: “This is a pivotal age for children as they prepare for high school and exposure to a more grown-up world. Their level of maturity can differ and some are more streetwise than others. It is important to teach them early of the trauma this can cause, how to deal with it and make sure they know the consequences of attacking someone else.”

Det Supt Gainer also believes that role-play allows the children to release pent-up emotions and permits their teachers a window into their world. Those children not directly involved in the drama sessions are having its messages re-enforced in other lessons, and staff hope all will act as anti-violence ambassadors.

The training and resources have been written and delivered by professional actors and facilitators from Liverpool education charity The Ariel Trust, who away from this scheme run programmes on radicalisation. Their approach is warm, engaging, and even though tackling a serious subject, humorous and fun.

The programme is funded by the Safer Streets Liverpool initiative, with the hope that it will shape and influence the behaviours of our youngest generation, encouraging healthy relationships and empowering open discussions.

Assistant Mayor of Liverpool, Cllr Sarah Doyle, said: “It is really important we engage young people in conversations around this issue. Children have access to social media from a relatively young age and it is vital we give them the knowledge to understand unacceptable behaviour and the impact it can have on themselves and others, as well as training them to cope with it if they suffer abuse themselves.”

Speaking at the launch of the campaign, Merseyside’s Police Commissioner Emily Spurrell said “Our Safer Streets campaign is providing a long-term, multiagency approach to tackling violence against women and girls; working with schools is a crucial part of this plan.

“We know the misogyny that underlies a lot of the predatory behaviour that women and girls experience on a day-to-day basis is still rife in our society. It’s absolutely vital that we open up a conversation about this as early as possible. We need to talk to young people and help them to understand what a healthy relationship looks like, the significant risks posed by the online world and - more broadly - how they can spot the signs of misogyny and challenge it when they see it.

“Educating the next generation on these issues will help us embed our vision for a Safer Merseyside.”