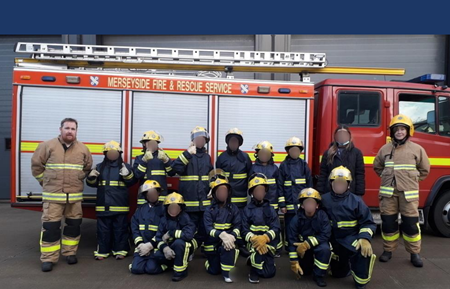 Dragging a dummy out of a smoking house and escaping from a potentially claustrophobic cage has helped improve the confidence of children in need of extra support - and made them bright beacons of hope.

Funded by the Merseyside Violence Reduction Partnership (MVRP) and delivered by the Merseyside Fire and Rescue Service (MFRS), the Beacon programme has lowered truancy levels and, say teachers, made a marked difference to young people’s behaviour and their relationships with parents and peers.

It has also imbued participants with a new respect for emergency services and even taught them first aid techniques should they find anyone suffering from a knife wound.

“It is fair to say that before Beacon, the young people had scant knowledge of what the Fire and Rescue Service does” said Detective Siobhan Gainer, Head of the MVRP, “these can be from learned attitudes and are often unhelpful. The fact that they have connected on a human level with the officers and been given a renewed sense of confidence and belonging is absolutely vital – especially after what has been such a worrying time for young people in our region. The acquired teamwork skills and new-found resilience participants gained, were noticed by all.”

Working with 126 primary school children plus eight from secondary schools, the Beacon agenda consisted of:

Held once-a-week for six weeks during term time (this was extended to 12 for secondary school pupils) programme participants included children struggling with the transition from primary to secondary school, those who had witnessed or endured trauma in their young lives, young carers, looked-after children, and those on the cusp of antisocial activity including making hoax phone-calls to the Fire Service or even setting fires.

One of those delivering the course said of the practical exercises – “Some of the young people are trying to be noticed by other kids outside of school by being daring. They've got opportunities to be daring with us, going in the rat run. It's a set of cages in the pitch black and they have to find their way around. That is thrilling in itself. Going in the smokehouse where they have to go in and they have to rescue dummies and it's filled with smoke, and they can't see anything. They're getting their thrills from that. It shows them that there are other ways to be noticed.”

Beacon was independently assessed via surveys and interviews with teachers, parents, and participants. Data and documentation on issues such as attendance levels was also collected by researchers at the Public Health Institute, Liverpool John Moores University. Their report concluded:  “The outcomes of the Beacon Project are significant for the children and the wider community, as the skills developed, and knowledge acquired allow them to become young safety advocates.”

A spokesperson for Merseyside Fire and Rescue, said: “Following a social and emotional approach it enables our Beacon students to function at a high level even when faced with trials such as stress, uncertainty, pressures, vulnerability and other school and life challenges”.