Lydia will never get knocked down again 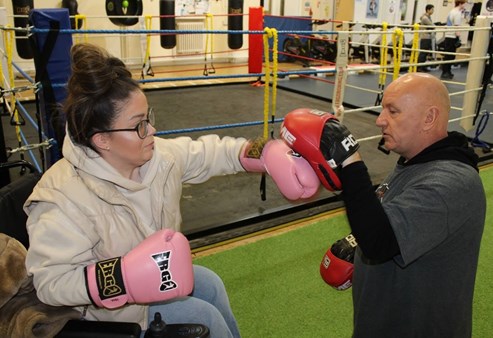 An Old Hall youngster whose confidence hit the deck when she was told she would never cut it as a hairdresser is fighting back – by getting the gloves on.

Lydia Spencer (now 24) endured an emotionally bruising time when her spina bifida rendered her almost unable to walk and persuaded college trainers that she could no longer pursue a career in beauty because she couldn’t serve customers, properly. Fickle friends who deserted her, also left her bereft of a future and supposedly out for the count.

But along with young people on the Merseyside Violence Reduction Partnership’s Community Cohesion programme, Chloe has now found a passion that has her hooked – boxing.

She is one of around 25 students attending Saturday pugilist classes at the Inclusive Hub in Kirkdale.

“We started weekend sessions with children with autism and other related conditions” said Liam Starkey, Business Development Manager at the Hub, based in the old community centre. “People like this cannot actually fight because doctors class them as having damage to the brain, but they can learn all of the skills and fitness associated with boxing, especially as some are heavy having not exercised.”

For Lydia the concentration and coordination associated with pad routines is particularly enjoyable. She said: “When I was at school, I used to walk instead of run in PE lessons and that was alright. But then I had to walk with a tripod and now I can only manage a few yards. I was told I would never achieve anything. I go to the gym but never really thought I’d like boxing but I like hitting it out!”

Lydia and other new members to the Hub can use a specially designed sensory room to prepare themselves for sessions – and cool down after them. Although boxing is a particularly popular way of engaging young people at present, it isn’t the only pastime available and football and even creating hanging baskets for their neighbours, also feature. “We called the programme Community Cohesion because we wanted the young people to feel like they are a part of what’s around them” continued Liam.

Detective Superintendent Siobhan Gainer, Head of the Merseyside Violence Reduction Partnership, said: “Liam and the team have proved that if you create the right environments for young people and take an interest in them, then they will progress. I was heartbroken when Lydia told us that she felt she had no friends or future. Well now she has a whole team behind her that is believing in her and is looking forward to working in administration.”

The Kirkdale Community Centre (also known as The Gordon) has a rich history of over 110 years having been erected in the Edwardian era of philanthropy that saw organisations like Lad’s Clubs created. Liam concluded: “We are bringing cohesion to our community once again. It has changed a lot over the years but there’s no reason why we can’t all live and work together.”