Let’s create a better world for those who think differently 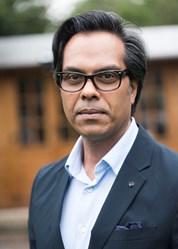 “When I was a child growing up in the North of England in the only Asian home on our street, we were beginning, but only beginning, to recognise that the negative labelling of individuals could be hugely detrimental.

Back then, terms such as “child from a broken home”, “single mother” and even “troublemaker”, “rebel”, and “vandal” were in everyday parlance.

Still, it was better than “naughty” and “stupid” I suppose, or even, “weird” and “freak.”

My son has autism

I am the father of a seven-year-old who is at an extreme end of the autistic spectrum. He doesn’t speak and getting him to eat is problematic, to say the least. I gave up work to care for him and believe that he is a blessing and a gift, who inspires me every day.

Autism has been misunderstood for centuries and I wonder what demonising terms those with conditions such as Asperger’s were labelled with in yesteryear.

Paradoxically one of the most famous historic figures who displayed autistic traits is none other than Mozart, and he earned the moniker, “genius”! He flourished because his extraordinary way of thinking was suited to the creative, bohemian world. Though it should also be remembered that he was feared and ostracised by many during his life, and ended up buried in a pauper’s grave.

For my son and others like him, the world can be a difficult place – especially to achieve success in. However, the concept of neurodiversity and the fledgling work organisations such as The Brain charity and the Merseyside Violence Reduction Partnership are doing, gives me cause for hope.

A new state of mind

The term neurodiversity encapsulates all kinds of diagnosed conditions such as Attention Deficit Hyperactivity Disorder, but it also hints at a movement that may influence how we think about people who, I would say, simply think differently.

The traditional world must change to meet the needs of someone with a condition such as Autism. And in doing so, it reaps huge rewards. This is something tech giants have done in creating autism-friendly workplaces. These organisations tap into the qualities that make these people special. The Autism Support Network class these as honesty, passion, a desire for clarity and a refusal to judge others.

That last point is ironic, isn’t it? Children with misdiagnosed or untreated learning difficulties are often pigeon-holed and descend into low confidence, isolation, and perhaps even criminal activity.

Plenty of strings to their bows

I wish the Brain charity and MRVP success with their endeavours in making all our young people believe that they are very special indeed and just need to find the right outlet to shine in. I shall follow their involvement in neurodiversity with great interest as I begin to formulate a campaign of my own.

Who knows, together we may unearth another Mozart?”

Lutfur Ali is the former Assistant Chief Executive of the London Borough of Tower Hamlets. He is a management consultant, and a national campaigner on the subject of neurodiversity.