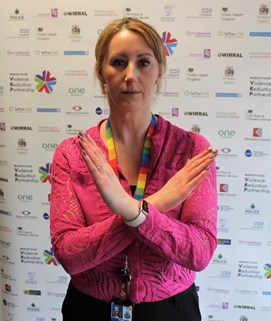 Young people must be taught to make misogyny history

That is the message on International Women’s Day (Tuesday March 8) from Detective Superintendent Siobhan Gainer (pictured), who claims that not educating young people on the impact of inappropriate texting and name calling can lead to a poisonous culture that can fuel hatred and even violence.

And with new figures for Merseyside showing that violence against women and girls rose by a third between January and December 2021, peaking at the height of summer and at Christmas, the message from the Head of the Merseyside Violence Reduction Partnership (MVRP) is certainly timely.

“I do not believe for a minute that people are born with the kinds of attitudes that lead to the contextualising and even demonising of women” said Det Supt Gainer, “these are views they can learn from their peers, advertising, and media, and sadly, their families. It is not good enough to wait for violent crime to happen and then punish. We must attack the root of the problem before it manifests into violence.”

The MVRP runs a raft of education programmes in primary, secondary, and tertiary settings with teachers as well as students given guidance. A drama production around misogyny has just toured Merseyside. Funded by the partnership and staged by actors from theatre group AftaThought, the production sometimes played to all-male audiences – provoking plenty of debate.

“There was sometimes a reluctance and sense of embarrassment about discussing these issues” continued Det Supt Gainer, “but also a worrying belief that abuse was only a bit of banter. The female character in the production portrayed beautifully how so-called sexting and online and face-to-face abuse can impact upon a woman and girl’s sense of self-esteem and make all females appear fair game for abuse.”

International Women’s Day 2022 is focusing on breaking the bias against women and girls in the workplace, in education, at home and even within religious and cultural organisations. An online poll by MVRP revealed that violence against women and girls was, however, the biggest concern – outstripping the business glass ceiling and health inequalities. Men and women throughout the world are being invited to take selfies portraying a cross pose to show solidarity with the campaign.

Merseyside’s Police Commissioner Emily Spurrell said: “Sexual violence does not occur in a vacuum. It is part of a society that allows misogyny and patriarchal attitudes to fester and go unpunished.

“If we don’t address the daily occurrences of harassment and abuse women face, we will never seriously change things in our society for the better. It is only by tackling this underlying culture of misogyny that we will be able to build a more equal, progressive future where every women and girl can thrive.

“That’s why it’s vital we engage with young people at the earliest opportunity to talk to them about appropriate, healthy behaviour. I’m proud the Merseyside VRP is helping to lead this crucial work ‘breaking the bias’ through a host of educational programmes. There are no quick fixes, but by changing attitudes now, we can build a brighter future for girls across our region.”