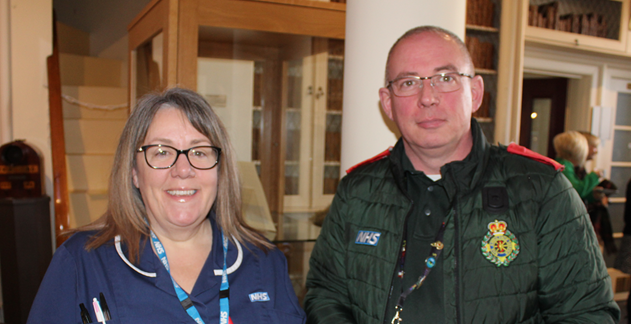 “We can no longer be just the people who close patients up – we have to be more upstream.”

That was the message a diaspora of doctors, nurses, local authority staff and youth workers heard at the MVRP’s first-ever foray into the subject of health and serious violence – from a medic whose area treats two stabbings a day.

Michael Carver, from London's Violence Reduction Academy, threw down the gauntlet to health and social carers, to work in partnership with each other in a bid to get to the roots of violence. Especially as 25% of his wounded patients had presented themselves at A&E with similar injuries before.

The clinician was one of an impressive array of speakers at a pioneering study day held in the historic surroundings of the Liverpool Medical Institution.

Also on the podium was Glasgow charity Medics Against Violence, who candidly admitted that their city had “taken its eye off the ball” when it came to knife crime because, “we stopped listening to young people.” That said, their Navigators programme continued to draw plaudits because it, “speaks to young people in their own language. Together, we draw up a wee plan and get great outcomes.”

Merseyside’s own youth scheme in Emergency Departments got an airing, while the importance of having relevant data particularly on hotspot areas for crime, was pushed home by Merseyside Police, TIIG and the MVRP’s Data Hub.

Young people from the Peer Action Collective shared some of the research they had conducted with an impressive 480 young people. This focused-on fear, experiences of youth services, apathy and building up trust with the Police.

Community champion Alan Walsh got a ringing endorsement for his creation of the Anfield Boxing Club. The 52-year-old promoted the value of lived experience, having himself been stabbed and told by teachers he would end up in prison in the past. His programme has engaged with over 400 parents and delivered presentations to 33,000 pupils in schools.

The most emotive presentation of the day belonged to Dr Sarah Stibbards, Clinical Director, Major Trauma Service, Alder Hey Hospital. She guided delegates through a clinician’s journey when dealing with a serious incident, highlighting the ripple effect of trauma on families, hospital staff and even visitors. This made it imperative for medics to help uncover the root of serious violence. “The day of just patching-up a patient have now gone” she said, “we have to get involved in the wellbeing of our patients.”

A film of the Healthcare and Violence event will be hosted here soon.