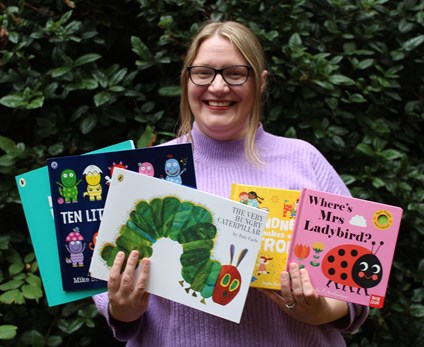 A novel programme to train those working with early years children has had quite a twist.

Because by teaching the Reading to the Bump initiative to professionals such as midwives, nursery and library school staff, trainer Jenny Holder has received a National Literacy Trust Award in the Innovation category.

Jenny, who is the Reading Coordinator and Communications Manager at charity The Liverpool Learning Partnership, submitted the fledgling scheme as part of her Post Graduate Diploma at Nottingham Trent University.

And even though she is delighted with the prestigious literary prize, it was actually seeing Reading to the Bump in action that has led to the most satisfaction. “I have kept up my connections since the training and seen how it has become Bumps and Brew at Sefton Library, for example” she admitted, “The programme brings a real connection between child and parent, improves communication – because you talk about the book you’re reading – and can bring a lifelong love of books, even amongst parents and carers who would maybe only read one a year when on their holidays!”

Reading to the Bump was conceived after studies revealed that babies in the womb recognised sounds from as early as 16 weeks gestation. “Research in the 1980s showed that when babies were born they recognised the traditional stories, nursery rhymes, syllabic levels and even the “Neighbours” theme tune they had heard whilst in the womb” continued Jenny, “The longer-term benefits for the child can include better communications skills, higher academic attainment, empathy, a good vocabulary, even improved mindfulness.”

Providing an overview of the science behind learning in utero and the benefits for families of starting to read to their child as early as possible, training for Reading to the Bump has now been delivered in five Merseyside local authority areas. Said Jenny: “The training doesn’t just tell them what they should do, it opens forums and finds challenges. I found there was no pushback to what we were teaching, that the science behind it was recognised, and that delegates were even using it with their own children – I know I do.”

Jenny’s child also has her eye on the Award’s prize - £100 worth of books. “Whatever I do with the prize, I am sure it will be spent on children’s books” concluded Jenny, “I am over-the-moon because the Award is celebrating partnership work, with not just one person involved. It is about those who delivered the training and of course the VRP who funded it.”

Learn more about the Liverpool Learning Partnership at https://www.liverpoollearningpartnership.com/