A rocky road to achievement 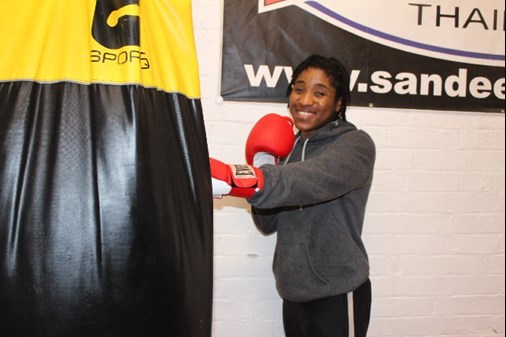 Bullied but not beaten, Cindy is back on her feet and starring in our next film.

Once fearful of homophobic violence in The Cameroon and then victimised because of her African accent, Cindy Ngamba is now sparring with an Olympic champion, coaching boxers at Elite Boxing and inspiring young women to become pugilists.

The 23-year-old is also making an appearance in our Weapons Down, Gloves Up film, being premiered soon.

Detective Superintendent Siobhan Gainer from MVRP said. “Boxing fills those involved with self-confidence, physical fitness and most importantly, self-disciple. The people that Cindy will be helping through our film, include those who may have had a chaotic family life, problems at school or even those who have been in young offender’s institutions. We cannot leave these young people out for the count and must help them back onto their feet.”

Watch-out for our film which will be posted here shortly.