Work with the perp to end the violence 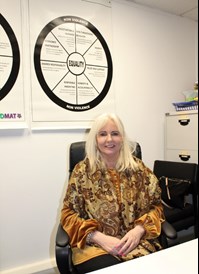 “I suffered emotional, psychological, coercive, controlling abuse and physical abuse and understand how some women would contemplate suicide.

Your self-esteem is so low, and you have no sense of self -worth and can’t see a way out because abuse doesn’t end when the relationship ends.  In fact, it can be more dangerous when you leave because the perpetrator doesn’t like losing control of you.

Having had a career in child protection where I found that 85% of referrals had come from homes where domestic violence was evident, you may be amazed at the following:

I believe the only way to protect women is to work with men.

Made and not born

You are not created looking down on women. Misogyny is learned behaviour and in all the years I have worked in the area of domestic abuse, I have never met a perpetrator who didn’t have violence in his history. Dad was probably the breadwinner and mum never went out. Boys like him were taught to fight whilst girls were mollycoddled and probably beaten, too.

Following my abuse, I looked up what help was available to those who are violent. Apart from a course in Manchester, there was nothing. I cashed-in my pension and went to Minnesota to get qualified in the Duluth Model of Training. This encourages abusers to look at what they did and how it relates to their fundamental beliefs. In other words, a man may hide his wife’s car keys. Why? Because he says he doesn’t want her to go out on the town. But his belief is, "she only gets out when I say she can.” We need to encourage men to examine their actions, intentions, and beliefs.

A model for curbing violence on the streets?

I used to fund DMAT myself and do the training in my own time. The funding we have just received from the Merseyside Violence Reduction Partnership made me break down and cry, because I now know I can help protect more women. I have seen how the training works and believe it can help reduce violence out of the home as well as in it. I love my work and it has been a healing process. Knowing it will now reach more people than ever, is so encouraging.”