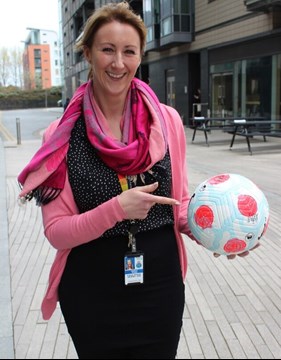 “I like to think the VRP is always ahead of the game.

And a few weeks before England's women triumphed in the European Championships, we were supporting a competition called “She Inspires” which turned women and girls into football champions and enabled young people to achieve some of their goals.

The competition was the brainchild of both the Police and Crime Commissioner for Merseyside, Emily Spurrell, and Serena Kennedy Chief Constable of Merseyside Police.

Immediately prior to its kick-off, a raft of influential Merseyside women from councillors to footballers and even world boxing champion Natasha Jonas, espoused the cause. The female role models were truly flying the flag and forcing the issue that women and girls should have the opportunity to play football. Crucially, Liverpool and Everton plus the Football Association provided coaching and refereeing training, and they are foundations, skills, and experience which are vital to life and work.

Such was the success of the tournament – and especially its finals day – that She Inspires beat off competition from nearly 50 other projects to be shortlisted for a county award. It also got a mention at the Community Shield, via the PA announcer and through a short film which you can view at https://binged.it/3cZMGuy

That praise was thoroughly deserved, as was the attention the tournament garnered. However, we have to remember that thanks to the valiant Lionesses, women’s football is on the rise and young women and girls have some real inspiration going forward. If we don’t take the opportunity to build on this  momentum then sadly that chance to move things further on might fade.

This is the same when it comes to working with young people. Projects from the football pitch to the theatre stage engage them, but retaining interest is the hardest part. Longevity is something we are always looking out for when supporting projects, mindful that young people’s progress is not always linear, and can veer off.

The Lionesses have been an absolute inspiration and made women, girls and even boys believe they too can achieve. But as the old adage goes, if you attempt to stand still, you will always go backwards. For our part, we are backing a major sports, arts, and culture fund project, packed full of the type of projects that move young people forwards. The Euros victory must be the kick-off of a concerted drive to provide positive activities for young people.​​