It's mentor for Abby 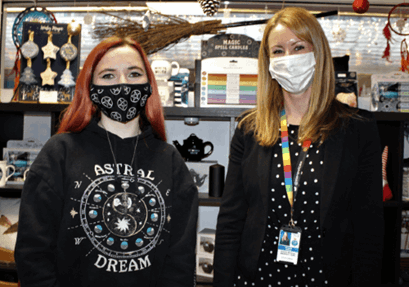 A promising young Bootle entrepreneur is being supported in her journey up the ladder by one of our region’s most prominent female police officers.

Detective Superintendent Siobhan Gainer, who heads-up the Merseyside Violence Reduction Partnership (MVRP), has agreed to offer words of encouragement and advice to Abby who runs a crystals stall at social enterprise, The Big Onion.

And perhaps we should not be surprised that the 18-year-old is so go-ahead. Her surname is Ready!

Representatives from the MVRP met with The Big Onion recently to discuss their common goals of helping young people into employment. They were then taken on a tour of the Onion’s stalls, which include a café, plus-size clothing store, record outlet and barbers, where Det Supt Gainer met Abby.

“Apparently, whilst her friends were struggling to motivate themselves fully during lockdown, Abby was creating jewellery and plotting her own business. She was also passing her exams so that she could pursue her love of photography at university” revealed Det Supt Gainer.

Those who mentor have usually been guided and supported successfully themselves and in the case of Detective Superintendent Gainer – some of that came from none other than the Chief Constable for Merseyside, Serena Kennedy.

The Big Onion is brought to you by Merseyside Expanding Horizons and can be found on the ground floor of The Strand Shopping Centre in Bootle.